Are hidden memories tripping you up? | Deborah Kevin
Blog 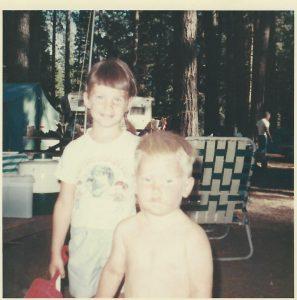 My brother and me, Yosemite National Park, 1968.

If you’ve been following me for any length of time, you know that I’ve been digging deep into the recesses of my life to illuminate memories, foster healing, and growth. Over the past four years, I’ve evolved back into the truest part of myself—and feel so light and joyful as a result. Not only that, my business has skyrocketed, and I’m serving the most beautiful souls as they change the world.

Despite doing all this work, I still struggled with increased visibility. And by struggle, let me share that when an interview I’d done last summer was released in January, and I received a flood of encouraging emails, texts, and Facebook messages, I lost my voice. Literally. For three weeks.

That’s when I knew I had more memories or stories to excavate to figure out why speaking or being seen was so painful. I enlisted support from Carrie Ekins, who is a myofascial release therapist (MFR), and Nancy Linnerooth, an EFT practitioner.

Carrie worked her MFR magic on me in a hotel room in Stamford, Connecticut. Snapping on latex gloves, she spent time releasing tension in my jaw. As she worked, tears began leaking from the corners of my eyes, sliding onto the bed covers. I didn’t yet know why. The deeper she went, the more I cried. Suddenly, a long-buried memory as clear as the day it happened came to me.

I lay on the living room couch, my mother sat on my chest, her knees pinned down my arms. I’m crying, and she’s fussing at me to settle down. She twisted and pulled at my loose teeth, not stopping until she’d removed them. I was seven years old.

It’s no wonder that when my sons went through the losing-of-the-teeth phase, I felt completely squeamish. This memory was literally locked in my jaw. Is it any wonder that I found speaking uncomfortable?

A couple of weeks later, I worked with Nancy to tap on my visibility vulnerability. I had no conscious memory of the story I share below, yet as I spoke the words to Nancy, it felt as though I were a spectator standing in the corner of the room, watching events unfold.

A little background first. My brother, who is three years younger than me, was born with a heart defect. As a result, he couldn’t run and play like a normal, rambunctious kid—which I was. My parents—my mother, in particular—spent countless nights and weekends in the emergency room as my brother contracted one thing after the other. That included meningitis. He flirted with death several times. So, from a parent’s perspective, I know my mother was doing her very best to keep my brother alive. She must have worried incessantly. Sadly, worrying about one child had repercussions for her healthy one, me.

I was about five years old. We lived in southern California in a house that had a playroom. On a shelf nestled between two closets, my father’s fish tank burbled creating a kind of white noise. In front of the tank, on a low table, my little record player spun a Mary Poppins album. I danced and sang, swept away like a chimney sweep on the rooftops of London. I felt pure abandonment and joy at that moment.

Suddenly, my mother burst into the room. “Turn that music down, Debby! You’re singing too loudly. Johnny is sleeping. Do you want to kill him with all this excitement?” She marched over and clicked the record player off.

I dropped to the floor. Of course, I didn’t want to kill my brother. I only wanted to sing and dance. I felt horrible that my actions could actually kill him. In my five-year-old magical thinking way, what my mother said made sense. Instead of singing and dancing, I learned the quiet arts, like reading and coloring. Over the years, I honed those skills expertly.

It all makes sense

No wonder I fell ill whenever I increased my visibility or spoke out. The unconscious responsibility of not killing my brother had been fused so completely to my voice, and to be seen and heard. I’m happy to report that, despite me stepping into the light and turning up the volume, my brother is still alive and quite well. Turns out my voice isn’t responsible for someone else’s well-being!

I share these stories to illustrate how the mind-body connection works either to our advantage or disadvantage. Clearly, I’d been doing all the “right” things to heal, and yet some unknown, unconscious tape controlled my success. Could that be happening for you, too?

If this story resonated with you, let’s schedule a virtual coffee date to explore alternatives for getting unstuck.

Want to join the discussion?
Feel free to contribute!

What kind of editor do you need?